Having had Henry take “his” practice at Shenington during half term, William was keen to demonstrate his superiority. For William, that meant he wanted to go straight into the 52s. He’d have taken a 52.99, so long as it was a 52 it would be OK. We prepped the kart, double-checked the brakes, and sent him off. He came back a little angry, but more upset to find he was straight into the ... 55s. Oh dear.

Unfortunately, at 11, Will hasn’t twigged that you never go fast in your first session, especially if it’s been 4 weeks since you last drove a kart. We regeared, reinflated and encourage Will, and he just about scraped his target, making 52.98s.

Will, of course, blamed the engine. He had assumed I’d put “Vampire” on, as threatened. Will understands the value of testing, but simply ruled out running what he thinks is a slower engine (it probably is, of course, but I’d have liked to have seen it). I hadn’t put eBay cheapie on, it was, in fact his full race engine.

So we put it down to the placebo effect, I showed him Vampire in the boot and made a note to show he was getting “his” engine in the morning. Will was a little upset, and we were all a little bemused to have lost a second over 4 weeks. But we were still confident the Sunday would see us back on pace.

Our DEP restraining kit fitted (what a pile of crap. I actually like the exhaust, but the restraining kit is pretty damned poor. Who has a 7mm socket?), we went out for the obligatory three lap practice.

First corner, first lap, he was taken out by a team mate. As usual, I was in the wrong place to see it, but as his dad explained, it was “a bit over ambitious”. Hands were shaken, apologies made and all was well. Except the side pod, the year old livery was now pretty much all black. Will was pretty much on the pace of his team mates, but still bemoaning a lack of engine power because the revs weren’t high enough. We re-lasered the front since he’d been in the grass barrier and sent him out for heat 1.

Will made steady progress through heat 1, until he came up behind another kart. This one, unfortunately, to quote another dad “just drove him off the track” on the exit of Café. 8 year olds being 8 year olds, obviously it was Will’s fault. (For clarity, it can’t be Will’s fault if he’s on the right hand side coming out of Café, since the racing line is on the left. He was driven off). We tried to ignore the other driver for the remainder of the day!

We re-re-lasered the front and finished lower-mid-grid in heats 2 and 3. From finishing in or just outside the top 10 last time, that was pretty disappointing. The pace wasn’t there, the teammates he was quicker than last month were 0.5s-0.8s a lap up the road.

Finally, for the final, we did look at the engine. And, to be fair, it did look short of revs. We made a change to the engine (that I won’t make public, because I want advantage

) changed the gearing for his P17 start in the final and sent him off.

In the parade lap, he did look stronger, but you can’t really tell from that. The race started. Will looked to have made a decent start, but was loaded up from the back and a three kart pile-up ensued on the first corner. One driver was thrown from the kart, Will tried to get going but couldn’t, and the other driver managed to get away in the end. 2.69s that final was, according to the official timing!

When I picked up him, it was pretty clear why he couldn’t get going. The bumper was rammed right into the back tyre, the nassau panel was flat, and Will wasted no time in saying “I had two karts on top of me”. His mum was toying with coming to this race. Just as well she didn’t.

We re-re-re-lasered the front and packed up to go home. Will wants the kart straightened. Personally, I think it needs it now, but Henry’s racing at Rissy in two weeks and that will be the test. If he has good pace, I can save £60 plus a ton of petrol. If not, well, a trip to Basingstoke will be needed before the Superprix. Hopefully we’ll be back on pace for then. 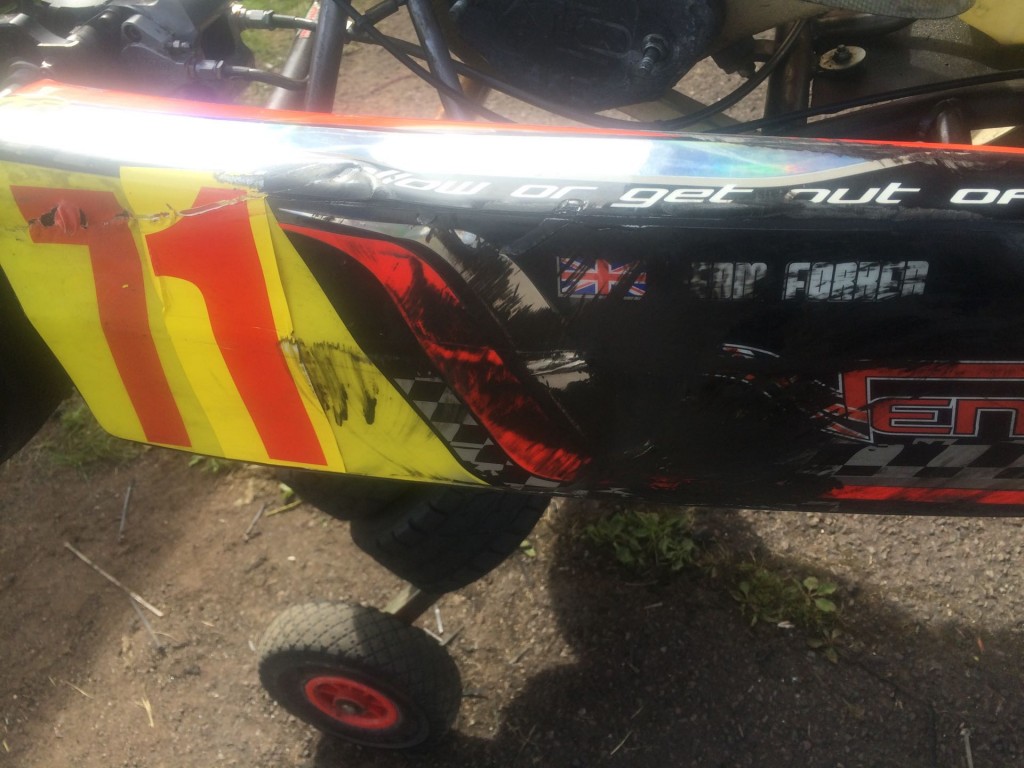 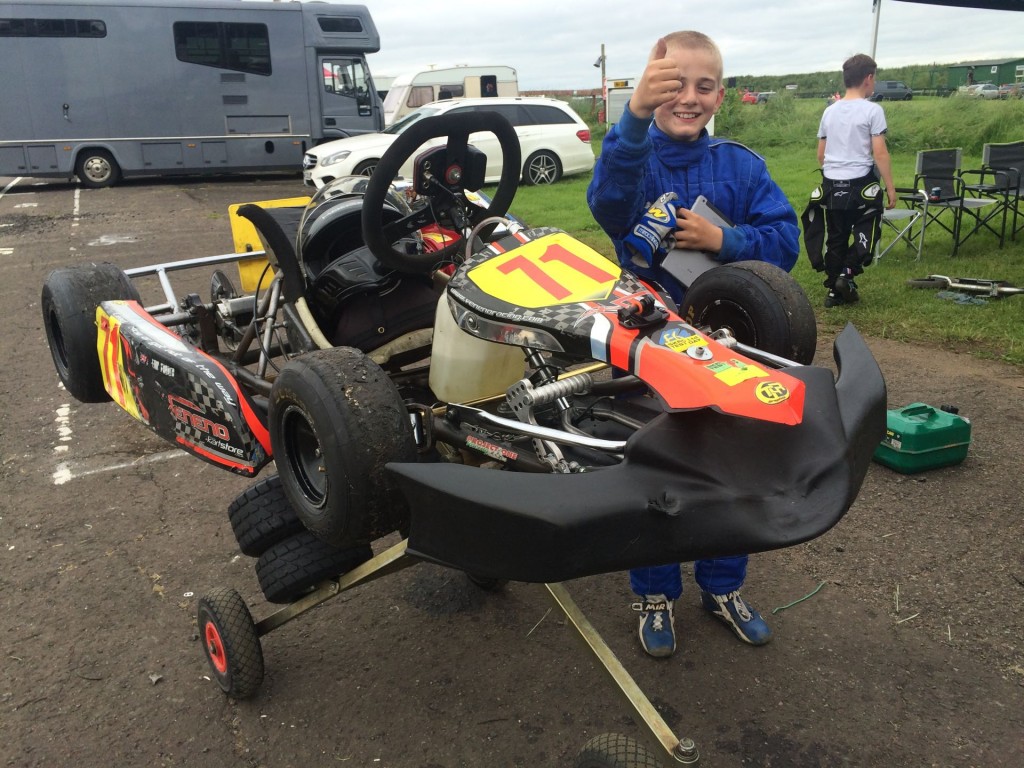