And down came the snow. Snow, in April. It was a shame that the clocks had changed, really, Will bemoaned the lack of “hyperdrive” on the trip up.

The track was sodden. TP had called our team mates advising to set up for the wet—usual stuff, i.e. high ride height, fronts out. But this was practice and changing the rear ride height on a 2012 Project One is a right PITA, so we left it at medium, put the fronts at medium and sent him out.

I had toyed with the idea of changing to our decent wets, but - as it was supposed to improve - I didn’t bother. I don’t like burning up wets on a test day.

The combination being both miserly and lazy worked as well as expected: we were nowhere. In fairness, no one was anywhere - the first session had very few karts out on circuit. We spun twice and the benchmark lap time was set at 1:03.59. Wow. One of our teammates’ dads commented that it is really rare to see times above 1 minute at Shenington - even in the wet, but, you know, ice is slippery stuff!

The day improved and eventually the track dried - we managed two sessions on slicks. However pace was pretty leisurely. I suspect the used slicks we bought last August from the 2015 Rowrah S1 round are probably past their best! Nah, Henry can run them at Rissy in a couple of weeks, there’s still a bit of tread on them!

We went away from practice having not really learned much. We’d gone down six teeth from the rear sprocket, swapped inters for slicks and lost 2kg of ballast (fatso). I didn’t mind that - we had race support on Sunday anyway. Seat time is still valuable and if they can still go relatively quickly on dodgy equipment and have fun it’s still a good day.

Nothing was bent, either. Excellent news! So I swapped the knacked slicks for the ones we bought in February ready for the morning and went home.

We arrived nice and early - earlier than I’d originally intended because the MSA Bambino championship was visiting. Bambinos are awesome! Tiny little karts, tiny little engines and they go at it properly.

I didn’t look at the programme when we scrutineered on the Saturday. One of Will’s teammates came over on arrival announcing excitedly that Will was on pole for Heat 1. I have memories of Henry’s first pole at Rissington just over a month ago that I didn’t really want to go over again. They went on a track walk with TP who guided Will through starting at pole while I lowered the front of the kart and got the pressures “just so”.

Well, we started on pole. I should have more faith in my son really. I videoed the start and - I don’t think it comes across, said despairingly “where is he?”. It didn’t actually occur to me that he’d hold first position into the first corner, so I didn’t even see him. Unfortunately I saw him going into Stratford in the air. It’s the first time the kart has left the ground since we had it.

I knew Will wasn’t going to win the race, but I did want to see how long he could hold the lead in a fair fight, and where he’d finish starting at the front. Unfortunately we languished in 19th and when questioned, he thought the kart was bent and didn’t want to push it. Fair enough, I suppose, when you’ve been fired off.

The driving standards in H1 were terrible. We had Will fired off, one of Will’s teammates fired off and one of the leaders pushed wide mid-corner back to about 7th. But ours was the only incident that ended up in the Clerk’s office.

When the heat was finished, we were handed our first Clerk ticket and Will was distraught “but I didn’t do anything wrong”. I explained that it’d be fine, all he has to do is tell the truth and they’ll work it out from there.

When we arrived, another dad and his son were there—our paddock neighbours—awkward. I had no idea which kart had been involved, only that Will had said “number 20”. Our paddock neighbours weren’t number 20 (it seems there wasn’t actually a number 20 and the number was misread anyway), so I figured they weren’t involved. However, we were called in together.

The Clerk explained what happens - you go in, it’s between him and the drivers and essentially the dads/mums/guardians shut up. The other driver was questioned first - since it was our first time - and then Will. Poor Will told the truth—the Clerk asked him where he was on the first corner, which is Café, not Stratford, and he was “defending on the inside”.

Nothing, because the marshalls/stewards didn’t see the number and they couldn’t see it on video either. We could make a complaint, but it would cost three figures. We’d get it back if it was decided in our favour. Given Will finished 19th, it would have made no difference to us and I didn’t want to make a three figure bet.

As the Clerk said, “justice is a funny thing”.

A cog change and a check over the kart reassured Will everything was fine. We’d be starting from the back anyway, so I wasn’t worried about a repeat start. Fortunately the heat was incident-free for pretty much everyone except our unlucky teammate, who was pushed off again. Will planted himself in the 52s consistently for the first time - a long term goal achieved and gained 8 places to finish 13th. New PB on our own engine of 52.67s. On a highly-rated S1 engine in November he had hit 52.60s, which Will counts as his PB, but that wasn’t consistent and we don’t have that power now (at least I don’t think we do!).

After the heat, we found that his teammates had found that a fully low chassis was working well. As we were medium/low I set about the dreaded task of lowering the rear in time for the final.

Two of Will’s teammates have 2015 Project One karts. On those, a long allen driver loosens the bolts and the axle can be moved up or down. Then they’re simply tightened. On our 2012 it’s:

Fully remove all 6 bolts, including the two that hold the caliper on. Make sure you don’t drop any of the spacers or washers! Change the axle height. Replace the bolts. Find that the caliper is now misaligned and adjust the disk position. Find it can’t adjust because it’s slightly bent. Partially remove the two caliper bolts, move a washer to adjust the caliper angle. Replace, tighten, test and repeat.

It’s not my favourite job. We also dropped a cog based on the data.

I went and picked up the results from Heat 2 to find that the kart that caused the incident in H1 had been excluded for being underweight. What a shame.

Will was unfortunately unconvinced by the sprocket change, mainly because we’d tried one tooth higher on Saturday and it didn’t work for him. But he was pleased he would be pretty much uncatchable on the straights if he could be smooth in the corners.

He went and delivered P16, which was up 1 place from where he started. Lap times were in fact a little slower, but still consistently 52. I don’t think the sprocket made much difference to be honest. Even if he could have been a couple of tenths faster on the “old” sprocket, it wouldn’t have been enough for a higher position based on the other lap times.

He had a cracking race with #23 towards the end. I did get worried because #23 appeared to be giving Will “the look of bin”, but they kept it clean. Will had him twice into Stratford and lost it twice into Wilkins, and they crossed the line 9 hundredths apart. This was progress. I’m not sure if #23 had had a day of incident, but he was faster than Will in practice last month and in that race had finished P8.

I had to check on “incident kart”, so went to get the results. It seems he demoted 10 places to 12th (ouch) for gaining an unfair advantage. Pity.

The results allowed us to look at Will’s sector times vs everyone else, he’s got a 52.3 in him right now. He just has to string it together, consistently. We’d met our previous goal of being in the 52s consistently this month. Our next is to get that consistency sector for sector to get the low 52s.

Honestly, looking at that data, and a shortcoming in the kart we’re about to overcome - combined with our head not being skimmed - he’s got the potential to be top 6 this year. 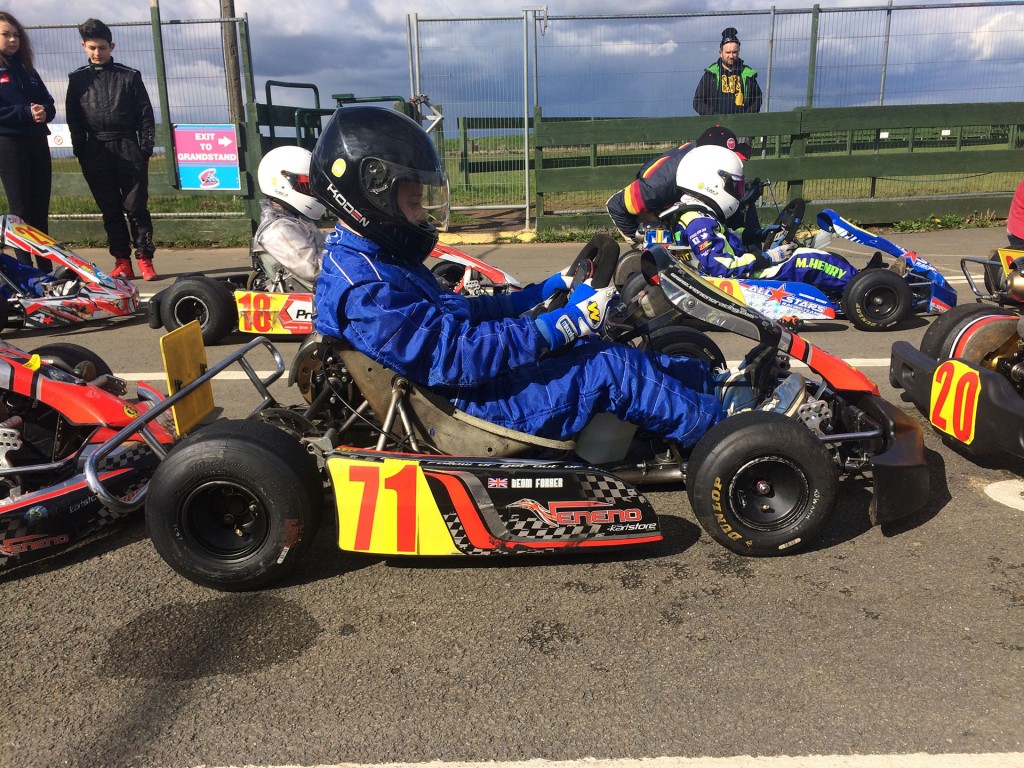 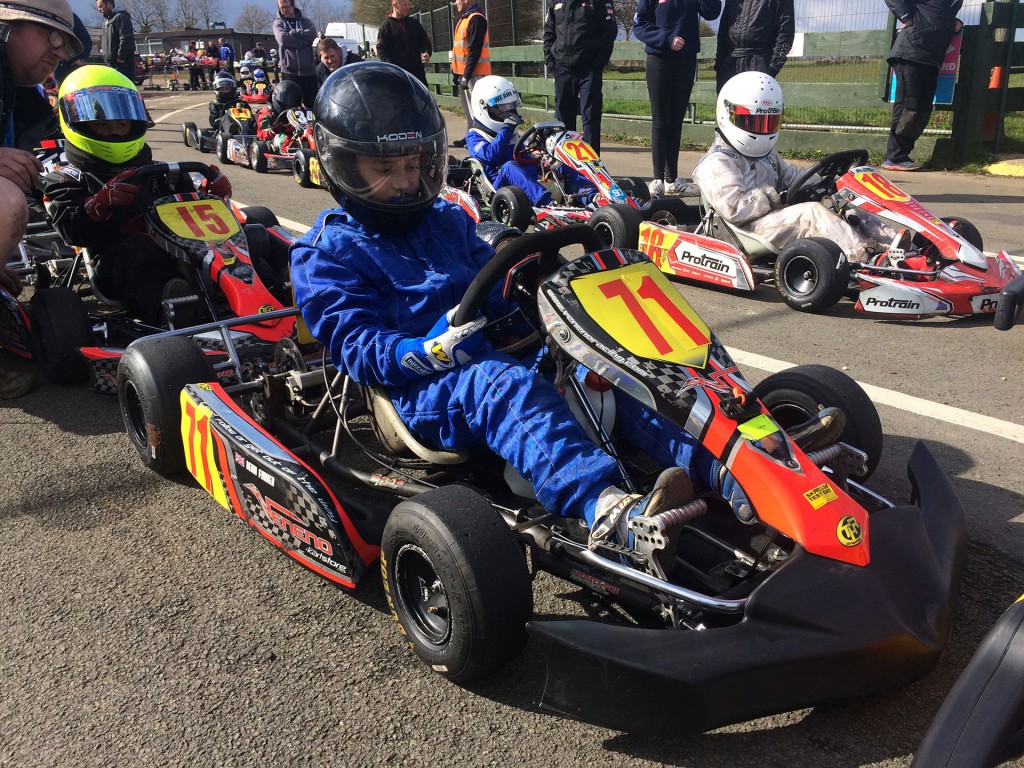