​Henry loves Rissington. He said to me the other day that it’s his favourite track, comparing it favourably even to Buckmore Park. Personally I prefer the latter as a track - the gradient changes and facilities are excellent and, I’m led to believe, improved since the new John Surtees ownership. We’ve not raced at Buckmore “officially” - only in their hire kart series, so can’t comment on race atmosphere, but it’s always been relaxed, calm and friendly at Rissy, which is one of the reasons I imagine Henry likes it so much.

On Saturday, we arrived early. Other team members were to arrive, but no TP as he was in Forest. We on track with team stalwart Sam, #15 and Jayden #34. We were also joined by a newer young lady in the team, running in Iame, #20, whom Henry had met about 9 months ago. I’d forgotten Henry’s neck brace, and #20 was kind enough to let him borrow hers (which was mercifully blue and not pink). A team battle was set, certainly amongst the Honda boys.

Henry did OK in Saturday but was about 0.5s off his best. He was generally faster than Sam, but not always, and the day was largely incident free. We worked on gearing, pressures, but we couldn’t get that final 0.5s off his time. Still, Henry was driving relatively well and enjoying himself.

Then, it all went wrong. Henry overtook a kart in session 5 into the dog-leg - his favourite manoeuvre - and the two touched. Ordinarily I wouldn’t have thought much of it - it’s practice, it’s an accident, it happens - but it was clear there were going to be problems when the other kids dad yelled “I hope you got that on video”. I did, as it happens. I’ll upload it when I get a chance. The two drivers spun, the other driver - according to Henry - turned in on him when he was directly alongside (you can’t tell from the video, but he was directly alongside when they touched). Then Henry gets out of his kart to check the other driver is OK, a marshall comes along and sends Henry on his way.

Where the fault has been Henry’s I have usually asked Henry to apologise to the driver involved. As he’d already checked on him - and this was clearly at most 50/50, I did not.

We got back to the pits, and I was just walking with Henry to the office to see if that was the last session and we could scrutineer, when the other kids dad comes up. He was clearly unhappy and asked “Can I have a word?”, so I said, “Yeah”. Then, in front of Henry, the rest of the team and his own child, he asks, angrily, “What the hell are you telling your kids? They’re swerving around all over the place, you had us off at Shenington [we didn’t], it’s dangerous”.

I simply said I wasn’t going to discuss it at that point and walked off, but the incident put Henry in tears, which was completely unnecessary. Yes, he’d had an incident, but he’d gone over and beyond, checking the other kid was OK—no one else did that in all the other incidents at that corner, of which there were many. We had a conversation in the office about the incident, and I checked Henry wanted to race on the Sunday. He said he did, so we went home to return in the morning.

Henry has had pretty poor starts all year, and in heat 1 he started P2. By the end of the first lap, #15 - his teammate who had started pole, was still in P1 and Henry was in, probably, P8. We were collected by #84 (I think) in the dog-leg in a rather over ambitious move which had him called to the clerk. We didn’t think much of it, it’s annoying at the time, but it was obviously dealt with.

On the start of heat 2, #84’s dad came up and asked if we were involved in the incident. I have to admit, I winced a bit following yesterday’s confrontation, but he apologised. I said it was unnecessary - kids racing is always going to end in some accident and it clearly wasn’t deliberate - they’re always learning. He said that it shouldn’t happen anyway, which is fair enough, and that was that. That, ladies and gentlemen, is how you should deal with incidents on track. With civility, not making other people’s kids cry.

The rest of the heats were fairly lacklustre aside from the ones where he started near the back. This would be symptomatic of a problem we hadn’t yet diagnosed, but it did appear he was struggling for pace.

Henry started at the back in the final, in front of the novices. For once, he had a reasonable start and kept up with the pack. But there was a problem on the first corner, which saw Henry - and others - take to the grass to avoid contact. That put him plum last. He did recover, though, overtaking a number of drivers before - after about 7 laps, losing it in the dog-leg. He spun, let the four drivers go past, and the carried on to finish at the back.

When asked why he spun, he blamed the brakes. I immediately inspected them, and the were fine. It’s possible something got caught in them as he’d reported some grinding from the back of the kart - but really that could have been anything from the sprocket protector being shifted by the grass excursion to the chain guard rubbing. Regardless, it didn’t happen again the final, so we put it down to driver error. Mercifully he didn’t collect anyone and ensue the wrath of others.

After the weekend, I asked Henry if he wanted to change track to avoid the driver we had an incident with on Saturday. His response:

“Why should I give up my favourite track because someone is trying to bully me?”. 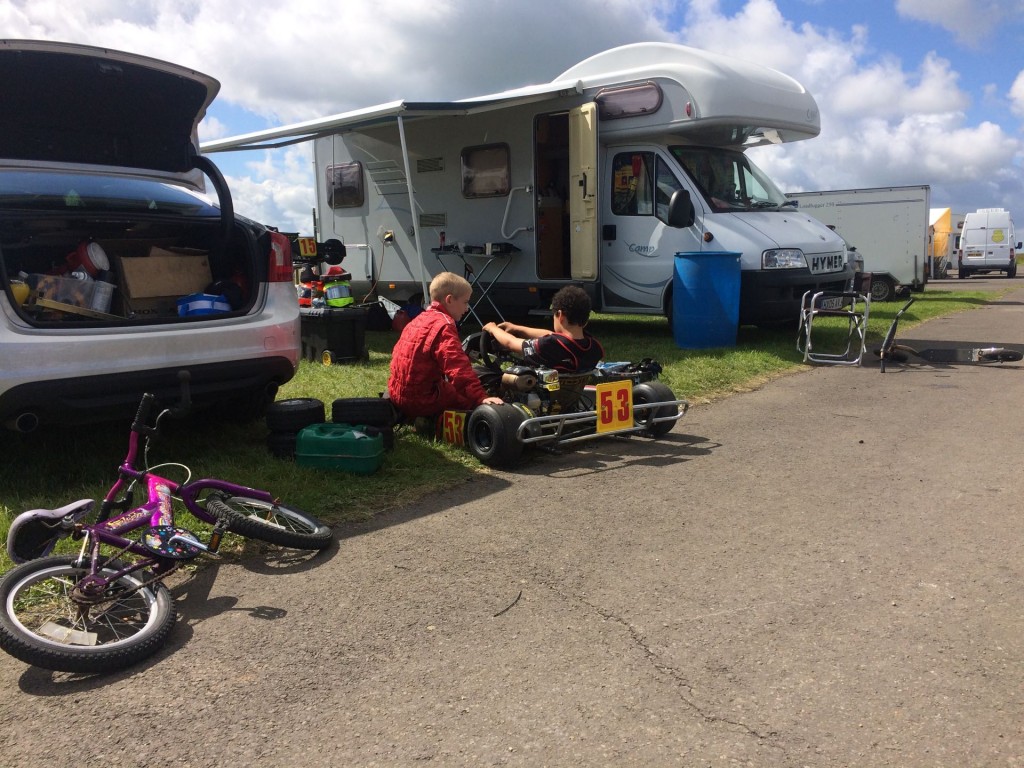